Advocate WITH rather than FOR! 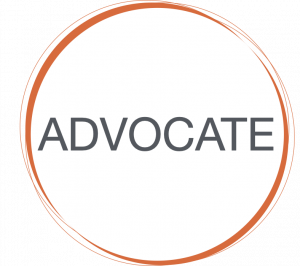 The importance of advocacy has become so paramount for me, especially when I’m in a vulnerable spot and reliant on  others to advocate on my behalf.

A few years ago (long after the onset of my stroke), I suddenly became quite unwell. I was abnormally ataxic or wobbly, slurring my words and saying things that were non-nonsensical.

My parents, my main advocates, knew this was not normal and took me to the emergency department at a hospital. The doctors looked at my medical history and considering my stroke diagnosis and associated deficits, told my parents it was all good.

However, they didn’t agree and thankfully they advocated for me and insisted that I have extra scans. 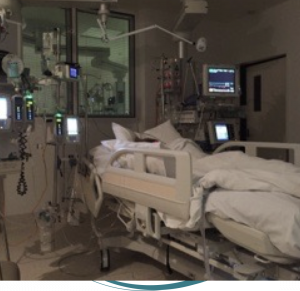 Shortly after I actually went into a coma (for the second time in my life) and was diagnosed with bacterial meningitis. When I woke in Intensive care 48 hours later, I was so confused, so weak, and my pain levels (which I manage by moving) were going crazy as I had been bed bound.

What followed was weeks and weeks of unnecessary procedures and tests largely due to little collaboration between my team. It was quite bad.

The hospital was understaffed so my family organised a physio to come in and mobilise me to help. That act made such difference. One less barrier to grapple with. One act which may seem tiny when you’re doing it but is life-changing often for the recipient.

When I was finally discharged, although still quite weak but I felt it was important to educate the staff about my experience – not to blame but to ensure it didn’t happen again to others. I wanted to express this to my medical team but knew I couldn’t do it alone.

But what mattered to me, didn’t bother my awesome advocates. They just said things like –“Let it go” “It’s the last of your worries’ ‘ You’re getting better now invest your energy into that Em”

But after a few conversations, I was able to make it clear to them that thi was important to me. They understood and  helped me organise the logistics, sat with me to write a letter, detailing the events and my thought and then on the day accompanied me to the meeting they arranged where I was  able to read word for word what I had prepared. Despite feeling so physically and emotionally fragile, I could articulate my thoughts. They probably thought it was a waste of my energy and their time But they enabled me to advocate for others. Yes I left that office feeling utterly exhausted but so empowered and felt closure.

I write in my book about the importance of adopting a more collaborative approach, where I felt so much more heard, included and empowered –

“… I felt at the centre of their care, that they were working together with me rather than for me. “ 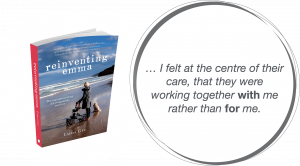 A lady asked me recently that in her advocacy role she grapples with giving the person with lived experience an opportunity to share their story in some capacity and see how taxing and gruelling it can be for them. That she feels that her role should be about empowering the person not depleting or minimising their capacity.

“It’s easier to sometimes do things for them or not ask (give them the opportunity) ” She confessed.

She wondered if she felt that it was wrong for her to ask them. But I said to her that having the opportunity to relay your story is so so gruelling but also so cathartic and empowering. It makes what you’ve been through so worthwhile.

Rather than not giving those you advocate for the opportunity, or assuming their needs, what is it that you can do to support them to voice their thoughts?

Perhaps, it’s helping them process, articulate and write their thought to find out what mattes to them. Maybe it’s educating others about their needs. It could be just organising the logistics ie arranging a meeting, or identifying access barriers or merely just supporting or encouraging them.

There are so many aspects to consider when enabling another to relay their lived experience. Whilst as an advocate you may speak on a person’s behalf, are you voicing what matters to them? Are there ways that you could advocate their needs to others and minimise the effort involved?

Importantly, advocate WITH them not FOR them!